Welcome to our online exhibitions page where you can explore past exhibitions. Text from the panels, images from displays and views of the cases can be found here.

The InfoAktiv screen in the Museum also has past exhibitions, so if you have missed one, there is another chance to see it.

The exhibition on display here is all about the shops in Rustington, from the very first ones in Sea Lane to the shops we know today like Waterstones.

The Museum is still collecting any old shops items and is keen to keep up to date with the database of “what was where when”.

The first shop in the Village was opened in Sea Lane circa 1846, just round the corner from The Lamb Inn. The first Post Office was also opened there in 1870.

In 1931 Cudlow Parade was built on the site of Cudlow Farm opposite Hobbs Farm.

Later in 1938, a second Parade of shops was built on land that was part of the Grange Estate once owned by the Urlin family and named Grangeway. A northern range was built in the 1960s on what was waste ground from the same estate.

The first shop on North Lane was built in the 1920s at the junction with Wendy Ridge (once known as Windy Ridge) and was run by the Watts family as a general store. It is now Ashdown Lodge Care Home.

Wendy Parade established itself along North Lane in the late 1930s. Easton’s Drapers, Selby’s Wines and Rowes Cycles have been among the shops on the Parade over the years. 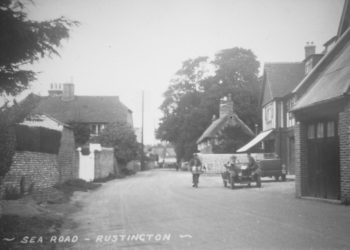 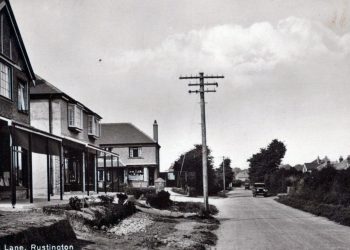 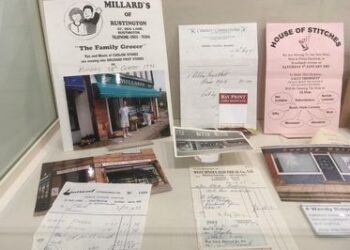 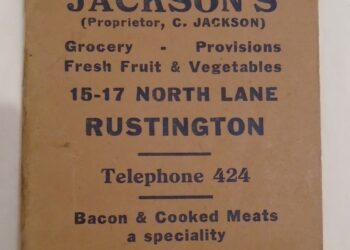 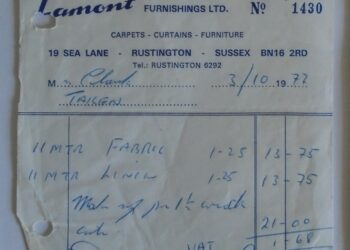 The late Victorian and Edwardian periods saw the start of Rustington’s expansion. New shops started to appear, catering to the growing population. The types of shops also started to vary.

Ash Lane was the location of the Village’s first sweet shop run by Mrs Berry, who sold homemade treats. The last occupant was Majorie Peall who had a hairdressers there in the 1960s. The building no longer exists, having been demolished in 1977. Boots the Chemist took over the new purpose-built shop in March 1978, currently the home of All Seasons.

This Parade of shops was purpose-built in 1936, with several large houses, such as “Matthews”, demolished to make way. The last to go was Broadmark Cottage and its small holding in 1970. Key Markets (now Waitrose) was built on the land. “Matthews” also hosted Westminster Bank, the Village’s first bank, for several hours a week. 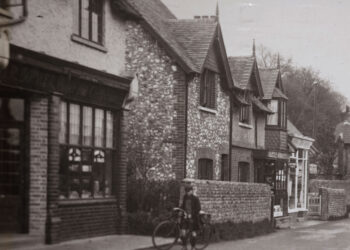 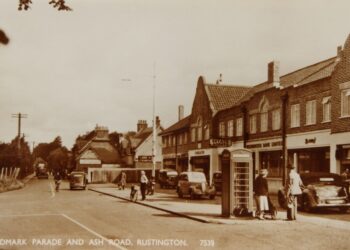 Broadway Mansions was the first purpose-built shopping complex in Rustington. Built in 1909 by Summers, one the Village’s early developers, it had shops on the ground floor and flats above. Many of the big names in Rustington started here, such as R&I Stacey. The complex was demolished in 1972 and replaced with a modern block housing a supermarket and flats. Foodrite was the first shop, opening in 1973.

Also known as Drake’s Shops (after their builder), Church Parade was built in 1936 when the Village expanded and with it the need for more shops increased. Other notable shops in the area were Vincent’s on Church Road corner, which opened before 1914. Victoria Farm Dairy stood opposite where Leaders is based today.

The biggest change to shopping in Rustington has been the development of The Street in the late 1950s and 1960s.

The first Parade of shops (where NatWest Bank is now) was built in 1956, but the original plans were for a cinema. The southern range (from Clarkes to Isla Living) followed in 1960 on an old paddock.

Four large houses once stood along The Street but were demolished in 1963 to make way for Churchill Parade. Church Farm Gardens Estate and the car park cover the old gardens. Churchill Court, behind the Parades, was built on the site of the builders yard for the development.

The parking in front of the shops was insisted upon by West Sussex County Council, and was forward thinking for its time.

The need for shops outside of the Village centre, led to new shopping Parades being built at Worthing Road and Station Road.

Beulah Bakery and Kenny’s Cash Stores were in Wallace Road during the 1920s, the latter at the junction with Worthing Road. Tunnicliffe Butchers and Ayling Greengrocers were in Worthing Road circa 1928, opposite Wallace Road. The shops still stand, though the businesses are different now.

A Parade of shops was built at the east end of Worthing Road in the 1930s, with a second Parade to their right in the 1960s.

The Village soon expanded eastwards, meeting up with East Preston. Station Parade was built in 1962 to provide shops in the area.

The Corner Café was run from as early as 1938 in the building that now houses New So India. Another business of note was the Station Road Service Station founded by Fred Gates in the 1920s. It became Hares in 1955 and is now the recently built apartments on the corner of Elm Place.

As Rustington grew, the space for shops became increasingly scarce. Trading Estates were built on former nurseries and brickworks, or out of town.

Situated off Worthing Road, there are two trading estates. Rustington Trading Estate was built in the 1970s by Store Property on the land that was part of the Worthing Road Brickworks and The Anchorage, the home of brickworks manger Mr Shepherd.

Brookside Trading Estate took its name from the nursery that stood on the site from the 1940s until the 1960s.

In the 1980s, Store Property built the shops where Pets at Home to Dunelm stand now, on the site of Barn’s Nursery, whilst Sainsbury’s was built on the site of the Darlington Mushroom Laboratories. Archaeology digs done before the building works uncovered pre-historic and Roman artefacts, some of which are in the Museum’s collection. Further west, Store Property also developed Manor Retail Park where Chandlers BMW to Aldi are now. Chandlers’ old showroom in the Village became Establo Lounge.